Home › Books › Why school ghost stories are worth studying

Why school ghost stories are worth studying

I’ve just started reading, based on a recommendation, Justin Evans’ ‘The White Devil’, a contemporary ghost story set at Harrow School. It’s rattling along at a fair old pace so far, building up an impressively creepy atmosphere with the contrasting tones of ancient learning and modern anxieties, the spectres of the past juxtaposed nicely with the uncertainties of the present.

It made me think, following on from my last blog post, that there really aren’t enough spine-chilling stories set in schools. Odd, when you consider it – school is a common experience to every man, woman and child (‘everyone thinks they know how to teach because everyone’s been to school’ was one of my common moans when I was a teacher discussing education with non-teachers , and I still stand by this, Mr Gove). Everyone has their own vivid, Proustian memories when they smell disinfectant, overcooked mince or pencil shavings, and everyone remembers the dark corners of their school playing fields, where you dared your friends to go while you shivered in the sunlight.

The recent film’ The Awakening’ was a cracking interpretation of the haunted school theme. A young female investigator with a sceptical approach to the supernatural (Derren Brown in a bustle)  is requested to debunk the myth of a ghost that’s causing panic among parents and pupils at a boarding school in the North of England. Once there, she discovers that the cause seems to be human malice rather than ghostly goings-on – but there’s more  to find out, starting with her own past. The film is meticulous in its capturing of classic chiller language – the cinematography is faded like old photographs, and shadows seem to elongate and darken as you watch – and creates a tone of subtle menace. (I must add, for balance, that I read a thought-provoking feminist interpretation of the film that gave it a proper panning for the events that happen halfway through the film, as the investigator suddenly seems to lose her clearminded approach and turns into the archetypal whiny girl needing to be rescued by the brave (male) Latin teacher).

As I say, it seems to me that there isn’t enough being made of the spooky potential of the haunted school. I’ve listed below the stories or novels I can think of set in schools – all of them set in public schools, it must be pointed out (still waiting for that elusive tale set in the concrete jungle of Bog Standard Comprehensive) with extensive grounds within which malevolence can lurk. I’ve left out those with fragments set in schools or higher education (The Historian, or The Secret History if you’re reading it as a Gothic chiller) and focused on those set in the claustrophobic and closeted  world of the school, where the febrile emotions of damaged children and adults can be further heightened by the threat of fear. 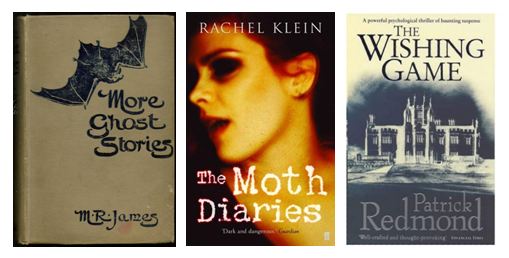 If there are more haunted school stories, please do let me know – particularly if they aren’t set in the past, nor in the rarefied world of the boarding school! I sense a rich spooky seam waiting to be mined…

Like Loading...
‹ Why all children should be forced to read ghost stories
Why horror anthologies are one of the great lost art forms of the 21st Century ›